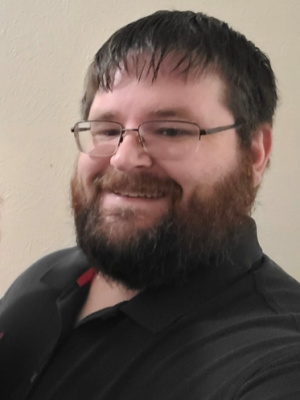 AZLE-James Ladd Richard Mason passed away Tuesday, August 31, 2021 at the age of 39.
MEMORIAL SERVICE: To be announced later.
Ladd was born Tuesday, October 20, 1981 to Richard and Bonnie Mason in Victorville, California. He graduated from Springtown High School. He loved reading, computers, gaming, crafting, cooking, baking, R C drones and hunting. He was a loving son, husband, brother, grandson, uncle and friend and will be missed.
From his dad:
One of my fondest memories of Ladd was told me by his Grandpa.
His Grandpa had bought four 80 pound bags of concrete mix. He asked Ladd to move them from his truck to a corner in the shop. When his Grandpa turned around to show him where to place the bags, Ladd was standing right behind him with all four bags (320 pounds mind you) and asked “where do you want them?”. That is when his Grandpa realized how strong 17 year old Ladd was.
Not sure if Ladd was 16 or 17 at the time
From his mom:
I have a memory quite like that. When we were building the log house we had purchased a mesquite log for the mantel. Michael and I had managed to drag it off the truck and that’s all we could do. Ladd came over and I was about to try and help him, said ” Mom, get back”. He picked up that log and put it over the fireplace.
Another memory I have is his hands. He liked to give neck rubs, he was strong and so gentle. I always called him my gentle giant.
From Lola:
My fondest memory of Ladd was on Ladd and Jennifer’s wedding day. Since they took pictures before the wedding, they got to see each other before they walked down the aisle. Jennifer was all put together and she came out from behind the curtain, oh my the looks on his face. His eyes lit up and then he teared up. It was like magic sparkled between them.
Ladd is preceded in death by his grandfather, Alford Farrell; grandmother, Mary Farrell; and grandmother, Sue Johnson.
SURVIVORS: Mother, Bonnie Johnson and husband, Michael; father, Richard Mason and wife, Angela; wife, Jennifer Mason; sister, Brandie Lowe; sister, Stephane Taylor; brother, Allen Whites and wife, Susan; brother, Michael Whites and wife, Amber; grandmother, Barbara Divido; grandfather, Johnnie Austin and wife, Gina; grandfather, Russell Johnson; 5 nieces; 1 nephew; 1 great niece; 2 great nephews; step-brother, Shane Johnson and wife, Jennifer; step-sister, Shonda Tice and husband, Matt; step-sister, Shelley Johnson; and numerous aunts, uncles, cousins and friends.

To order memorial trees or send flowers to the family in memory of James Ladd Richard Mason, please visit our flower store.