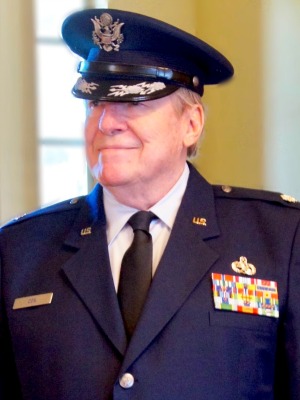 FORT WORTH–Lt.Col. Michael David Cox U.S.A.F. Ret., was called home on September 4, 2017, after a brave fight against a sudden illness.
Interment: Mike will be laid to rest among the other heroes of our nation in the Arlington National Cemetery.
Mike was born in the Bronx, NY, on May 3, 1940. He was the son of Maurice and Mildred Cox. He grew up on Long Island NY, and graduated from St. Bonaventure University in Alleghany NY. The University’s motto “Becoming Extraordinary “would describe him throughout his life. Upon graduation Mike entered the service of his nation, receiving a commission in the U.S.A.F. He served several tours of duty in Vietnam, and was awarded many decorations, among which was the Bronze Star and The Presidential Unit Citation. After a distinguished military career, Mike worked for McConnell Douglas, and Boeing, before retiring completely in the mid 90’s. Mike was a storehouse of colorful stories and reminiscences of his time in the military. He was generous and always quick to offer any assistance he could provide. He enjoyed travelling in his later years, especially to the reunions of his old squadrons. He was active in the Military Officers Association of America, and the Veterans of Foreign Wars. He joined his second family in Ohio, and was very highly regarded in his community. As he grew older, he and his wife would travel to Myrtle Beach, SC for the winter. As usual, Mike became a highly regarded member of the retirement community there as well. Mike recently relocated to Texas, and was adapting well, when he became ill.
Survivors: Son, David and daughter, Kaycee of whom he was very proud, always speaking of their achievements; brothers; Maurice, Charlie, Dennis, and Steve; wife Veronica; step daughters, Felicia, Cristina, and Doris Amelia; grandchildren; Vanessa, Tiffany, and Nathan; and many friends.