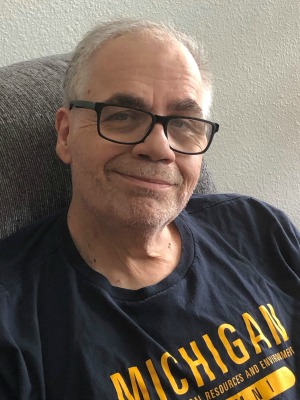 ARLINGTON-Mark Robert Bourdon, 66, a loving husband and father, was called to be with the Lord on Saturday, August 15, 2020, after a year-long battle with heart and kidney issues that began with his first heart attack last summer.
Memorial service: There will be a private celebration of Mark’s life when we return to Michigan to visit family next summer.
Memorials: In lieu of flowers, donations may be made in Mark’s memory to the American Heart Association or the American Kidney Foundation.
Mark was like a Michigan badger—he never gave up and fought bravely and valiantly to the end. He was born on July 20, 1954 to Robert and Mariwyn (Wheeler) Bourdon in Muskegon, MI. He graduated in 1972 from Muskegon Catholic Central High School and earned a B.S. Degree in Criminal Justice in 1978. He married his devoted wife and lifelong partner, Madeleine (Kleiner) Bourdon on August 22, 1981. They were blessed with two beautiful daughters, Laura (Bourdon) Harris and Rebecca (Bourdon) Wise. His proudest accomplishment and biggest joy in life was his daughters and watching them develop into the wonderful, smart young women that they have become. He worked as a security officer until he became disabled last year. He was a dependable and loyal employee. He had a quick wit, great sense of humor, a phenomenal memory and he was the one everyone wanted to have as a partner when playing Trivial Pursuit. The family would like to thank the physicians, nurses and staff at Muskegon Mercy Hospital, Hackley Hospital/Mary Freebed Stroke Rehab Unit; UT Southwestern Medical Center-Dallas; and Texas Health Arlington Memorial Hospital for their extraordinary care of Mark during his recent stays.
Survivors: Mark is survived by his wife of almost 39 years, Madeleine (Kleiner) Bourdon; two daughters, Laura (Bourdon) Harris and Rebecca (Bourdon) Wise; sons-in-law, Wesley Harris and Jake Wise; his mother, Mariwyn Hoffman; brothers, Brian Bourdon and David Bourdon; sisters, Renee (Loren) Schofield, Lisa (Tom) Hilliard, Anita (Mike) Dusnik; and numerous nieces and nephews.

To order memorial trees or send flowers to the family in memory of Mark Robert Bourdon, please visit our flower store.