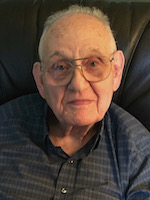 Paul Ernest Ming passed away on June 2, 2022. He was born in El Reno, Oklahoma on March 31, 1931 to John Clyde Ming and Juanita Mae Mills. Paul was a US Army Korean combat veteran, having served as a medic from 1948 to 1952 and attaining the rank of master sergeant. He was honored with the Soldiers Metal in addition to other awards and decorations. Paul retired as a lieutenant with the El Paso Police Department, and was also a retired park ranger at Lake Texoma State Park. Along with his much loved wife of 75 years, Bobbie, he raised 4 daughters, enjoyed his two grandchildren, and was pleased to welcome his first great grandchild.
Paul enjoyed boating and camping with family and friends, traveling with Bobbie across the US in their RV, and he was an accomplished genealogy researcher. Paul and his wife lived their golden years in Fort Worth. He was a proud Mason and member of the Sons of the American Revolution. A man of honor and duty, Paul was a mentor to many and a trusted friend.
He was preceded in death by his brother and sister-in-law, Don and Joan Ming, daughter Ruthie Ming DeLeon, and granddaughter Kathryn Ashli Murphy.
He is survived by his devoted wife Bobbie; daughters P. Kathryn Murphy, Toni Skartwed, and Traci Ming; daughter’s spouses Harry Murphy and partner Marycarol Hennessy, John DeLeon, and David Skartwed; grandson Aaron Armand DeLeon and his wife Alexandra, and their son Ayden, who is to be joined this summer by a baby girl; nephew Don and his wife Vedia Ming and family. The family will celebrate Paul at a later date in a private gathering in El Reno, Oklahoma.

To order memorial trees or send flowers to the family in memory of Paul E. Ming, please visit our flower store.